Three terms for the price of one in this blog post.  An abece (or an abc) is a poem where each line or each stanza (or even each word in a stanza, in one particularly jazzy Latin example) begins with each letter of the alphabet in turn.  Chaucer’s translation of Deguileville’s prayer to the Virgin Mary is usually called his ABC because each stanza of the poem begins with each letter in turn.  Another Middle English poem, often called ‘The ABC of Devotion’, models itself on a child’s alphabet, beginning with a cross and ending with puns on the ‘tittle’ and ‘point’, the punctuation marks that sometimes followed the alphabet in a primer text. 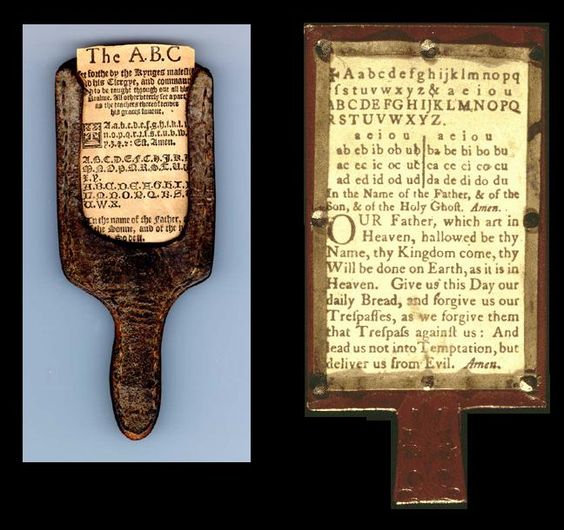 The teasing out of a word’s letters as an acronym of other words is often called an acrostic, though we might more accurately call them ‘backronyms’, i.e. a reverse acronym, where the letters of a word are each expounded as if the word were an acronym.  A backronym like this is called a ‘poyse’ (i.e. a poesie) in Middle English.  Backronyms were a popular device in Latin, French and English, as part of political prophecy, religious devotion, satire, love poetry and moral instruction, amongst other things.  Mum and the Sothsegger calls the expounding of the spelling of Cain’s name as CAIM as referring to the four orders of friars proof ‘in a poysie-wise’ (497) of their ignominious origin.

The Latin name of the Virgin Mary, MARIA, was frequently spelled out into five or more words.  Lydgate encourages his readers to make their own backronym as an act of devotion: ‘For your poysy these lettres fyue ye take, / Of thys name Maria’ (Lydgate, Legend of Dan Joos).  In the N-Town cycle pageant in which Mary is presented by her parents in the Temple, an angel expounds the significance of her name to Mary in person.  The playwright takes a popular devotional practice and retrofits it into this scene where the role which Mary will play in salvation is spelled out to her.

Dunbar has a stanza spelling out his patron’s name in a poem praising Bernard, Lord Stewart, a famous French knight of Scottish origins.  Dunbar writes the backronym letters into the metre and rhyme scheme of the poem.  The poem says Stewart’s name is worth to be written in gold, but here it gets written into the fabric of the verse, a nice compliment to this worthy warrior:

There are also plenty of acrostics proper, the spelling out the name of an author, a patron or a saint, using the first letters of a line or stanza in poetry, but also using the first words of each chapter or book in prose works.  These acrostics encode authorship for ever into the structure of a poet’s work or build a lady’s name into a poem which is then hers and no one else’s.  They are often found in poems which are also prayers. Whoever reads the poem-prayer cannot help but spell out the prayer’s addressee or the name of the person making the prayer (or that poet’s patron).  There is a nice example written in octosyllabic rhyme royal, in which each stanza spells out STANLEI, likely a patron of this poet from the Stanley family:

I’m speculating that the popularity of acrostics in verse in the late medieval and early Tudor period reflects the fashionability of poetic form in the fifteenth and early sixteenth century.  Acrostics rely on verse form to work and highlight both lineation and the visual layout of poetry on the page (with capital letters/litterae notabiliores picking out the acrostic down the left edge).  Signing a name via an acrostic shows a poet’s mastery of the constraints of verse.

Abece poems and acrostics have an interesting relationship to alliterative poetry, where each line is ‘governed’ by a letter.  The ABC of Aristotle combines the abc genre with alliterative verse to give a list of qualities which one should not be too excessively: ‘To Amerus to Aunterus and Angur þe not to oft’.  It’s alliterative verse brought into good moral order by the structure of the alphabet.  Young readers can learn their letters and their good manners simultaneously.

The Treatise of a Galaunt (?mid-fifteenth century) has an ingenious use of backronym alliteration.  The majority of the poem follows a rhyme royal rhyme-scheme without much alliteration.  In one section of the poem there are seven stanzas in a different form, each stanza a kind of expanded backronym acrostic on each letter in turn of the word galaunt (meaning a fashion victim who indulges wastefully and sinfully in fashionable attire, a popular satirical target).  Though he stays in a rhyme royal pattern, the poet shifts in these seven stanzas into something approximating ‘classical’ alliterative verse for the stanzas in which expound the word galaunt.  The lines are definitely longer than the non-alliterating material at the start of the poem.  Here’s the stanza for L:

It’s possible, of course, that this is two poems combined into one.  But if not, as well as highlighting the acrostic here by changing the metre, the poet draws on the satiric associations of alliterative verse to entertainingly harangue the sinful behaviour of the thoughtless galaunts.

Another form-conscious use of an acrostic comes in a poetic warning to young women about the dangers of vanity, given the modern title A Mirror for Young Ladies at their Toilet.  On the left edge of the poem is the acrostic MORS SOLVIT OMNIA (‘death puts paid to all’), though you would need to emend the surviving text to get the acrostic exactly right.  On the right edge of the poem is a fancy rhyme scheme, a kind of inaccurate imitation of a French fixed form lyric (abbba baaab abbba). These formal constraints are in tension in a very neat way. One is a trivial kind of ornamentation, made only by the sound of the words in the rhyme scheme and signifying nothing much, mere decoration, like the vain fashion and self-decoration the poem warns against.  The other is more hidden but (in the view of the poet) much more important: all of this ornamentation will be dissolved by death, so you should put your efforts not into vanity but into good works.  It’s a kind of anti-poem, in a way: rhyme is for fools, but acrostics are forever. 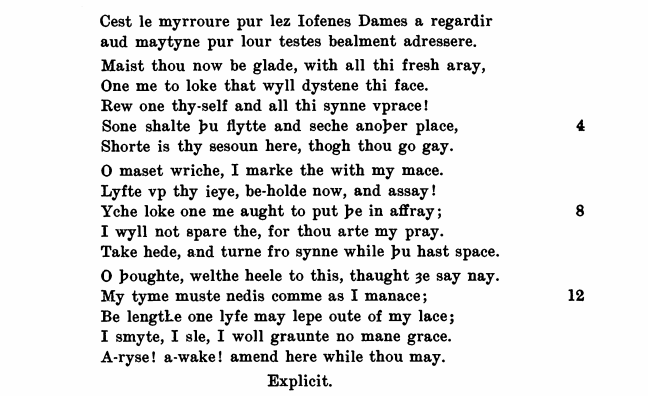