Three Dead Kings describes an encounter between three living kings and three dead kings. This motif, three living figures in the prime of life meeting three talking skeletons, was a familiar subject in medieval iconography. The British Library has a great blog with lots of images of this motif from their collection.

The Middle English Three Dead Kings puts this striking image into words in an exceptionally demanding verse-form. Thorlac Turville-Petre suggests the poem may be the most ornate in the English language. Each thirteen-line stanza has the rhyme-scheme ababababcdccd. The two parts of the stanza are linked by iteration between the eighth and ninth lines. The stanza also divides metrically into two parts, with the first eight lines written in four-stress alliterative long lines and the wheel of five lines written in three-stress alliterative lines. Ad Putter has shown that the b-verses of the long lines observe the b-verse constraints of ‘classical’ alliterative verse. 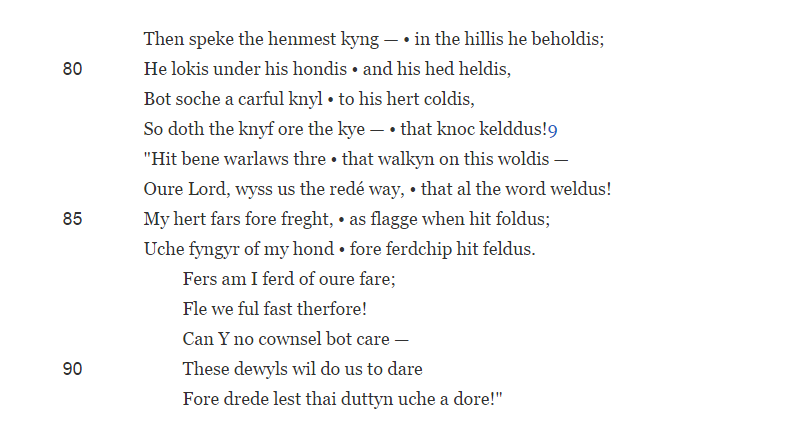 All of this formal constraint forces the poet to produce amazing, elusive and elliptical English to meet his own self-imposed demands. This translation is therefore highly speculative, drawing heavily on the glosses and notes provided by Susanna Fein and Thorlac Turville-Petre in their respective editions (for the latter see Alliterative Poetry of the Later Middle Ages), and also on the researches of Eric Stanley and Ad Putter.

[Lines 1 to 13] On a birch-covered bank where tree boughs are dazzlingly green, I saw a savage boar brought to bay. Fierce dogs ran speedily, making lots of noise: each of them wasn’t much bothered about peace and quiet. I thought it very fitting to see such a sight: how, beside a willow, the boar found himself in a fix. From the time that the noise of the hunt began until it was nearly night, from noon until bedtime, the time seemed to me but nothing. It seemed to me no more than an instant to see how he shuddered and writhed. The huntsmen had horns which they rightly blew: they halooed their hounds with “how!”. I had never heard such a din in the woods!

[Lines 14 to 26] It was good fortune to witness such a noise in the woods, to see that the hounds seized him and brought him to ground. Barons then arrived at that bay with bold hunting dogs; they blew their bugels very noisily to encourage their dogs. Three kings came there, rightly counted, accompanied by din and jollity and tales which they mocked, each man that was there did as they wished. They demanded complete sway over these woods and these wildernesses; they demanded to enjoy these woods and wastelands that there were just as they wished. Listen what befell on their adventure, if you’d like to know, listen and learn: they didn’t enjoy learning their lesson.

[Lines 27 to 39] When they reached these woods, their joy vanished. They encountered squally winds and very gloomy weather, and such a mist came over the earth (as far as I can recall it to you) that they lost sight of every single man from their fellowship and their company. “This whole adventure,” said one, “which has befallen us, I suppose that hardship has come upon us because of our status in the world. Though we are very excellent kings and come from noble families, much sorrow has befallen us, and there’s nothing I can do about it. I predict nothing but trouble: let us take cover and concoct some plan. By morning this mist may improve and our Lord can deliver us with joy, or truly our lives are lost.”

[Lines 40 to 52] They had not ventured forth but a few footsteps when they found very beautiful fields and very brightly coloured meadows. Three men rushed from a grove in one instant, murky shadows who were fated to appear just then, with long and lean limbs and very weak legs. They had lost the lip and liver in the time since they were dead and buried. There was no man who was there who dared nod or turn away, but instead they reined in their horses who snorted in fright. Their horses snorted and halted; these men [i.e. the Dead] summoned them. They saw no help close at hand, but each king invoked Christ, crossing themselves and reciting the creed.

[Lines 53 to 65] The first king had sorrow, his heart overcast, for he recognised the cross on the grave-cloth that covered the chest. His foal would not move an inch, but snorted vigorously, his fair falcon fell to his fist in terror. “Now all my gladness is gone! I shudder and fear those three very grim ghosts who make me so afraid. I have travelled far by woods and by wilderness, but I was never so sorrowful before this in any place that I know. I think I have never had such sorrow: I’ve lost my wits or they are not up to this. Certainly it will soon be clear that running away will lead us into trouble: despite our rank, I think that we are trapped.”

[Lines 66 to 78] Then the middle king spoke, he who was great of strength, he was made just as a man ought to be with might and main: “I think, sirs, that I see the most peculiar sight that any man saw and was granted under the sun: that of three very loathly creatures who have lost the light, both the lip and the liver are separated from the bones! For if we go back to town as we’d planned, a very perilous route, I think, is indicated for us. We are under instruction, it seems to me — I tell you nothing but the truth. What use is our hunting with “how”? Now let us go speedily to the group over there, or quickly we shall regret our rashness.”

[Lines 79 to 91] Then the hindmost king spoke: he glances up, hiding his head. He peaks through his fingers and held his head in his hands. A knell so frightful chills his heart, it was like a knife or the key which chills the knuckles. “There are three demons who walk in these woods. May our Lord, who controls the whole world, show us the right way to go! My heart trembles for fear like a reed when it bends, each finger of my hand clenches for terror. I am terribly afraid of our adventure; let us therefore flee quickly! I predict nothing but sorrow – these devils make us cower for fear that they will block off every escape!”

[Lines 92 to 104] “No, we are no fiends,” said the first, “that you find before you; we were your earthly fathers who have graciously nurtured you. Now you, who are lords over every town from Lorne [in Argyllshire] to London, are more likely to leave than leaves on the lime-tree. Just as you beat and imprison those who disobey you, so you will be bound in torment unless you atone for that wrong. Lo, here are the worms in my stomach – they swarm and bundle! Lo, here is the tie-band of the sheet which I was wrapped in! I was wrapped therein, indeed, when in the world I was most honoured. My flesh was very comely to kiss. Yet it seems it was a mistake for us to pass on lordship to you, you who will not now remember us with a mass.”

[Lines 105 to 117] That other corpse began a very loud speech: “Look at my bones that are black and bare! While we dwelt in this world, we were highly respected; we had our wife at our will and wealth to watch over. Don’t think this just a marvel, but learn to fear from my example: even if you weren’t as handsome as me, thus will you fare! And if you believe in Christ and learn his teaching, abandon fleshy desire and don’t rely on that body made of earth. For why would you believe in it? It lies! It leads you astray by falsehoods, when you are proudest and highest of all, and when you hasten away from this world, it reveals all your wicked deeds.’

[Lines 118 to 130] Then the third loathly one at last, with loins very lean, with each leg as thin as a leek, they were wrapped in linen: “Make me your mirror! My joys are now paltry. While I was a man on earth, my crimes were heinous. I thought it a capital idea to treat farmers with contempt – for that I was hated by villagers and servants – but never did a king with his entourage seem to me so faultless. Now there is no rogue in Christendom who will bow to me, who will bow to me or come when bidden, unless he is off his head or a fool. Behave in such a way that you don’t dread judgement – we have no longer enough time to tell you – but turn away from your trifles in good time.”

[Lines 131 to 143] Now these ghosts were ready to go, they glided to the grave. Then these men soon began to cheer up. They agreed on the right course and quickly they rode away: the men could recognize the red rays of daylight. They never again judged a book by its cover, but they always had a kindlier heart from that day forth. And they who were in sin were mindful of that ultimate reward and by God’s mercy they made a chantry chapel. They consecrated a chantry chapel with a mass, because of meeting those men on the moor, and this poem was written on the wall. Too few people will believe this, alas! May our lord deliver us from damnation. Amen.