[Update: the whole translation is now available as an ebook via Amazon]

A sneak preview of part of a work in progress, though I promise you that other blog posts will be very soon on their way (including all you might ever want to know about the caesura in Middle English poetry).  I’ve been enjoying the school holidays with my daughter and this blog has therefore been a little neglected.  I have, though, been working on a side project: a translation into Modern English prose of The Kingis Quair, an early fifteenth-century dream vision written by James I of Scotland.

You can find out more about this text via the online TEAMS edition introduction and read the poem in the original Middle Scots here.  Below is my translation of the first few stanzas of the poem, in which the narrator takes a book to try to cure his insomnia.  The book is Boethius’s De consolatione philosophiae, which prompts thoughts of James’s own misfortune: being captured by English pirates and becoming a prisoner of the English crown for many years.  He doesn’t fall asleep over his book, as some dream vision narrators do, but rather he hears (or imagines) a rather Disney-ish bell speaking to him, asking him tell the story of his life.  He makes a cross with his pen, as scribes sometimes did when beginning copying a text, and then begins. 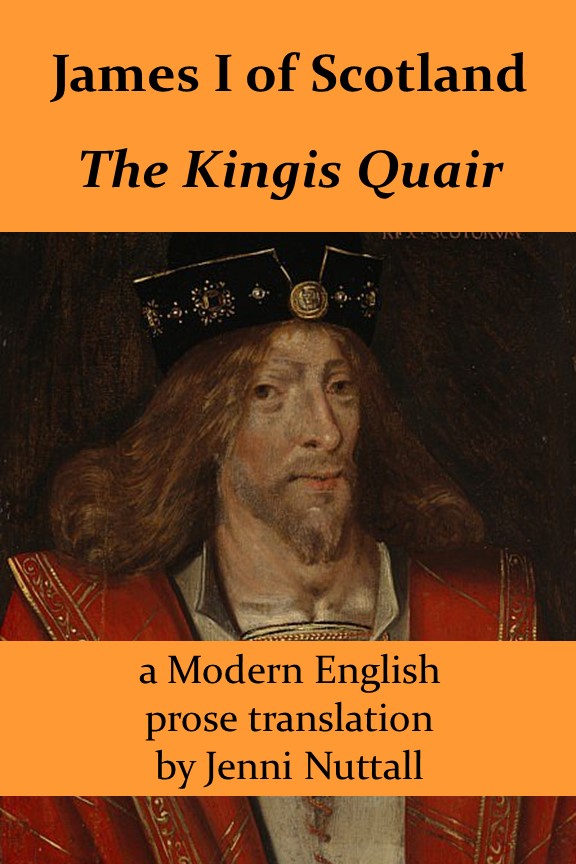 [Stanza 1, lines 1–7] The blazing stars were twinkling like burning coals high in the dome of the heavens, and bright Cytheria [i.e. Venus] washed her tresses (which were golden like wire) in Aquarius, she who a little beforehand in fair and pretty dress had carried her bright horns, moving northward, through Capricorn, it was close to midnight,

[Stanza 2, lines 8–14] when, as I lay in bed, waking all by myself, just parted from sleep a moment before, there came to my mind many sundry things, this and that — I can’t say on what account — and I couldn’t drop back off by any natural means, therefore I then knew of no better plan than to take a book to read for a while,

[Stanza 3, lines 15–21] the name of which is rightly called Boethius, named after he who compiled it, a book teaching the counsel of Philosophy as assembled by that noble senator of Rome, who was once the greatest in the world, and yet, having been prosperous, was condemned by Fortune for a time to a poor life in this wretched world.

[Stanza 4, lines 22–28] And with that, here in this book, in his sweet verse full of morality, this worthy nobleman and scholar so eloquently set to work his pen full of rhetorical colours, first describing his good fortune and after that his misfortune, and then how he, in his polished narrative, comforted himself with philosophy.

[Stanza 5, lines 29–35] Although I started off intending just to read my book as a way to get to sleep, before I stopped I thought it would be best to read more of the writing of this noble man, who within himself achieved complete deliverance from his misfortune, poverty and distress, and established his true security in them,

[Stanza 6, lines 36–42] and so what had been the virtue of his youth beforehand became the source of his delight in his maturity. Fortune turned her back on him, and therefore he rejoices and is comforted that he is released from those unreliable worldly desires, and so he patiently endures his penance, and out of his virtue gained contentment,

[Stanza 7, lines 43–49] by means of many a noble argument, as he thought best, composing in his eloquent Latin language, so full of spiritual profit and rhetorically adorned, which my learning is too immature to explain. Therefore I put him aside, and in my own language I’ll head again towards the point of my subject-matter, leaving all incidental things.

[Stanza 8, lines 50–56] As I was saying, having been reading the whole night long, my eyes began to sting from studying. I shut my book and placed it at my head, and down I lay without any delay, turning over this reading-matter afresh in my mind: that is to say, how Fortune, just as she wishes, will always change around the fates of each class of person.

[Stanza 9, lines 57–63] For it’s true that every person clambers one by one on her unsteady wheel, and, their footing failing often, when she chooses to turn it, some go up, some go down: there’s no status or age who’s safe, no more the prince than the servant, so unpredictably she shares out her lots, especially to the young, who seldom can predict anything.

[Stanza 10, lines 64–70] Among these thoughts churning to and fro in my mind, I remembered my own fortune and destiny: how she [i.e. Fortune] was first my enemy in tender years and then again my friend, and how I might get a remedy for my distress, and I began to reconsider all my lot in life, so much so that I could not sleep any longer or rest, so were my wits contorted.

[Stanza 11, lines 71–77] Over-tired and worn out with tossing and turning, thinking about all this, weary from lying abed, I suddenly pricked up my ears and soon I heard the bell ringing for matins and so I got up: I’d lie there no longer. And now (can you believe it?) such an imagining came to my mind that I constantly thought the bell said to me: ‘Tell me, man, what happened to you?’

[Stanza 12, lines 78–84] I thought to myself then: ‘What’s going on here? This is my own imagination: no living thing talks to me. It is just a bell, or maybe the workings of my imagination causes this illusion, that’s what makes me think so foolishly like this’, and then it happened exactly like this.

[Stanza 13, lines 85–91] At that, having made my mind up, since I have imagined the sound in this way (and in my time wasted far more ink and paper than this for not much point), I decided to write some new thing: I set myself down and straightaway took my pen in hand and made a cross, and thus began my book.