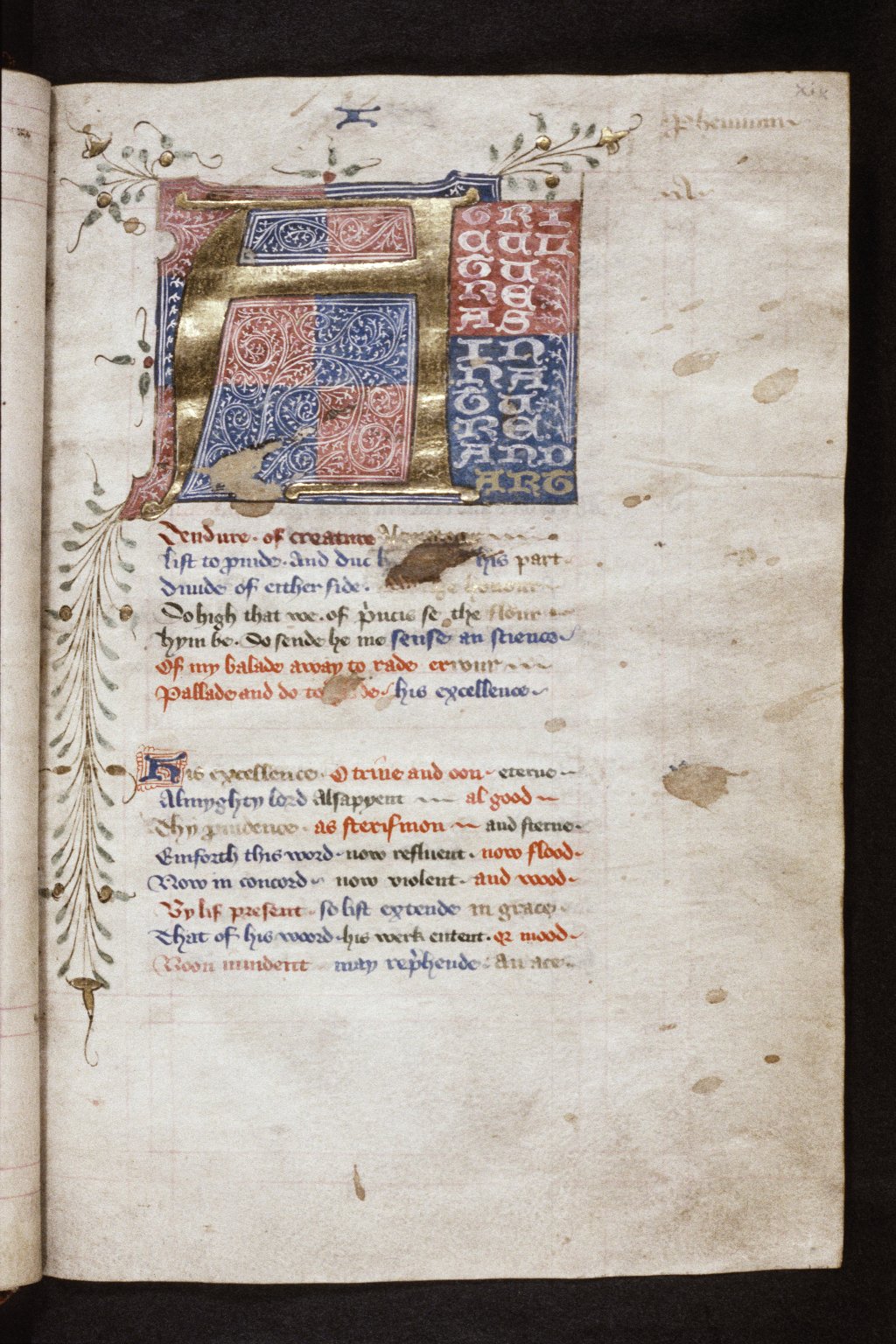 The picture above is the opening two stanzas of the prologue to the anonymous Middle English verse translation of Palladius’s Opus agriculturae (scroll down for a text and translation of the first stanza) in Oxford, Bodleian Library MS Duke Humfrey d. 2.  As you can see, the first line of the stanza is written down the side of the initial A and the other lines have phrases written in different coloured inks.  It was translated for Humfrey, duke of Gloucester (youngest son of Henry IV) between 1440 and 1447.  (On Humfrey as a reader, patron and book-owner, see recent work by Daniel Wakelin and David Rundle).

This translator uses form to offer formality and deference in his prologue.  This is poetry as intricate, rare, luxury object.  Each stanza in the prologue concatenates, with the last word of one stanza becoming the first word of the next.   He writes in eight-line stanzas rather than the rhyme royal of the main text.  He also uses different patterns of internal rhyme in different stanzas in the prologue.  The internal rhyme (picked out with colours below) in this first stanza splits each ten-syllable line into three parts.  The odd-numbered lines are split into groups of 4, 4 and 2 syllables, whilst the even-numbered lines split into groups of 2, 4 and 4.

It seems to me that this poet draws on medieval Latin verse to elaborate his English prologue.  The internal rhyme produces an effect rather like the leonine rhyme of Bernard of Cluny’s De contemptu mundi.  There is also a kind of serpentine rhyme with rhymes chained across pairs of lines.  It makes the verse slow down to become dignified and stately (if you read to the internal rhyme), or (if you read to the normal stanzaic rhyme) the internal rhyme works like a hidden extra ‘code’.   All this makes the language very contorted and hard to translate (what lies below is very tentative), and this privileging of pattern over sense may not be to everyone’s taste.  But for me it’s a useful indication that Middle English poetic form was by 1440 something which could be manipulated, by techniques drawn from Latin verse, to engage and flatter a patron.

Agriculture as in nature and art
T’endure, of creature al Creatour,
List to provide, and duc Humfride his part
Divide of either side, addyng honour
So high that we of princis se the flour
Hym be;  so sende he me sense and science
Of my balade away to rade errour,
Pallade and do, to glade his excellence.

(The Creator of all creatures chose to ordain agriculture to endure in nature and occupation; and to specify Humfrey’s role in every respect, adding honour so high that we see that he is the flower of princes; so may he send me good sense and knowledge to erase error from my poetry, and to [translate] Palladius, in order to please his excellence.)