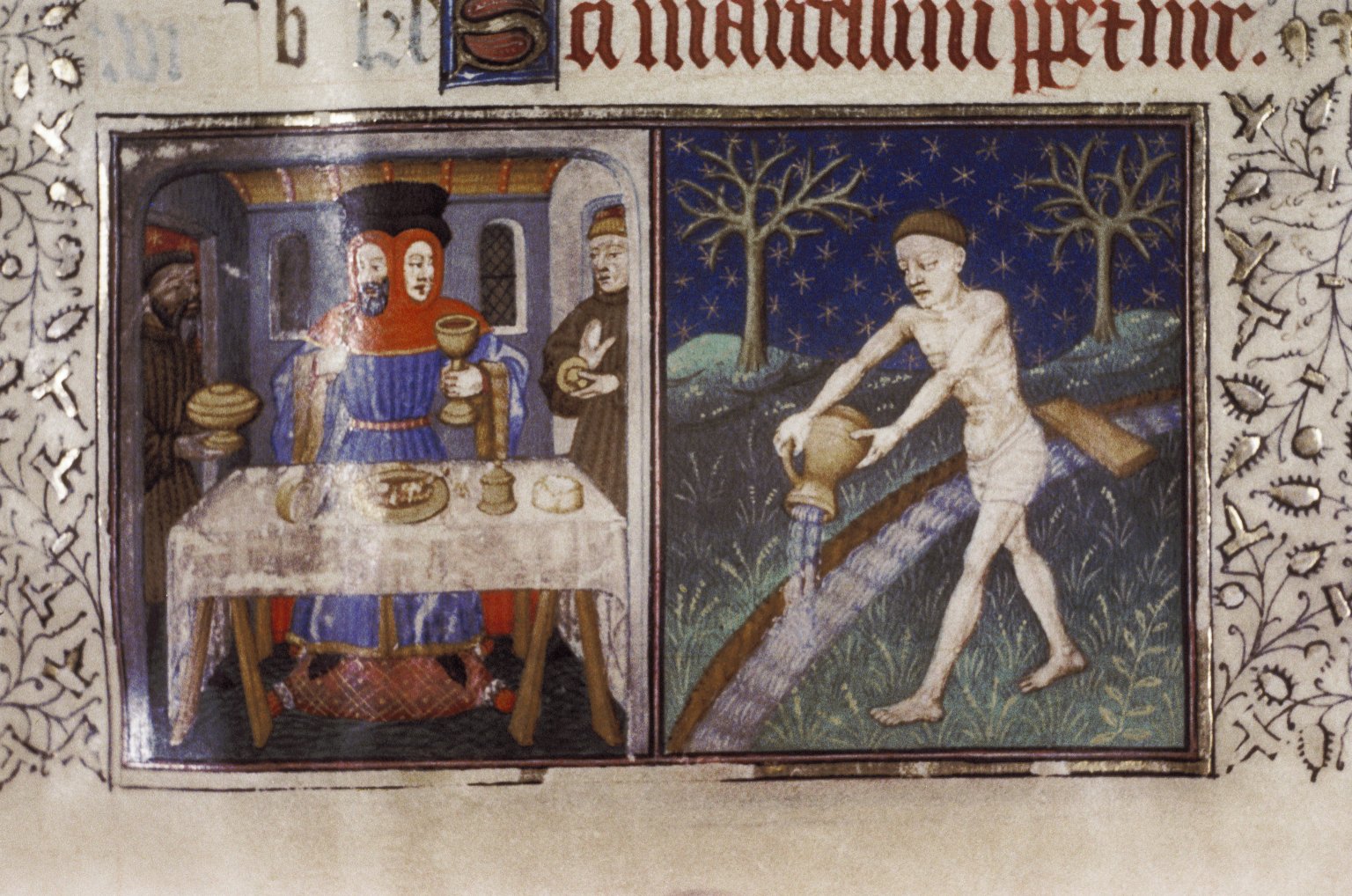 The picture above (from Oxford, Bodleian Library MS Auct. D inf. 2. 11, a mid-fifteenth-century French Book of Hours) shows the double-faced god Janus feasting.  Janus is depicted with two faces so that he can look in two directions at once: back to the previous year and ahead to the new year (just as does the month of January which bears his name).  According to Ovid in the Fasti, Janus is also in charge of beginnings and endings: ‘Whatever you see: sky, sea, clouds, earth, / All things are begun and ended by my hand.’

What has this got to do with Middle English poetry, you might be asking.  Last week’s post looked at the way in which the poet-translator of the Middle English version of Palladius’s Opus agriculturae used poetic form (both verbal rhyme and visual colours) in a prologue addressing his patron, Duke Humfrey.  In the penultimate stanza of the poem, as part of a two-stanza epilogue to his translation, the translator does something even more audacious.  He composes a stanza which can be read horizontally AND vertically.  You can read each line horizontally, with the same line appearing vertically in a column.  (Scroll down for the text of this extraordinary stanza, laid out as a table, and below that a tentative translation).

Why does the poet do this, beyond an obvious desire to show off his technical skill to his patron and to praise Jesus in intricate fashion?  In the prologue, our poet drew on the internal rhyme of Latin versification to enhance his English poetry.  I think a similar thing is going on here.  This type of verse, according to Dag Norberg’s introduction to the study of medieval Latin versification, is described as Januarii versus (‘Janus-style verses‘) because the words ‘look’ in two directions, both horizontal and vertical.

Once you know the name of this Latin verse form which the poet here attempts in English, the reasons for this technical feat become clearer.  This stanza appears as the conclusion of the poem (fittingly for Janus), at the end of the section of the text describing the agricultural tasks associated with December.  Though the text finishes here, we know that the year will turn and that January is just around the corner, so this is a double-faced stanza both ending the poem and looking back (or indeed forward!) to its beginning.  The use of this verse form for the penultimate stanza is a kind of formal in-joke with his patron and/or with readers knowledgeable enough about Latin treatises on the arts of poetry to know the name of what was here being done.

(Glory, praise, honour be to you most excellent Jesus,
Praise unto you [who is] our justice, our soul’s light,
Good work, life, light, [and] virtue bring honour to you,
Be our good Lord, governing all our abilities,
Give us good judgement to govern [our] virtuous work,
You [are] all of our life, fostering us just so,
Most excellent soul’s light, our thought dedicated to you only,
Jesus, light, virtue, might, right thus supply us.)