My last post explored stanza-linking or concatenation, the chaining of one stanza to another by the repetition of a word or phrase.  This post is about linking within the stanza, which I would prefer to call iteration to keep the two things separate.  Iteration means doing something over again, repeating or renewing something.  The poet repeats a word or a phrase at the same point within each stanza (meaning that the iteration is part of the verse-form rather than incidental repetition), and this repetition of the same word or phrase produces a point of linkage within the stanza.  Sometimes the link is not exact but rather a repetition of the same root word in a different tense or form, or a punning link where the same word appears in two different senses.  Here you can find iteration in lines 73 and 74 of Three Dead Kings: 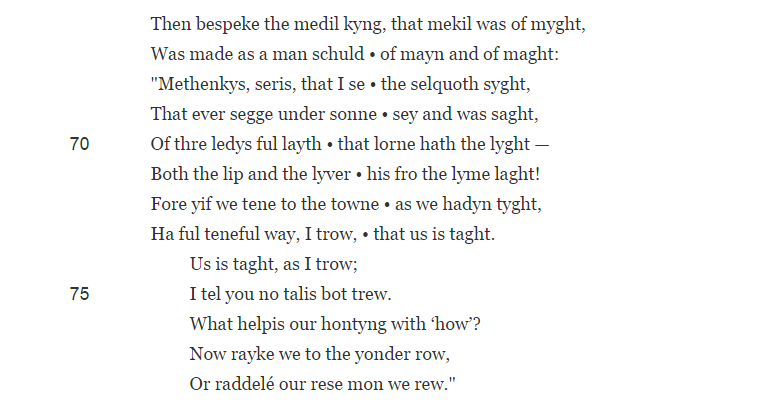 Iteration, as far as I can see so far, occurs structurally in Middle English only at the point at which a stanza might be split in two.  For an example, here’s the rhyme-scheme of a twelve-line stanza: ababababcdcd.  As you can see, this 12-line stanza could easily split into two units of eight and four, so the iteration occurs to link lines 8 and 9, joining the last b-rhyme line to the first c-rhyme line.  Stanzas in which the rhymes cross over each other and therefore aren’t splittable, like the octave ababbcbc pattern, don’t have iteration.

That is not to say that all stanzas which could be split into component parts without crossing rhyme had to have iteration.  Plenty of poets are not bothered about splittable stanzas.  Like stanza-linking, it’s not really pragmatic (i.e. you can’t really argue that it’s just a practical solution to stop scribes misplacing parts of stanzas), but tends to co-occur with other kinds formal complexity like stanza-linking or alliteration etc.  So it’s used by poets who are hyperconscious of form.

It turns up in different types of stanzas and in different genres, so is clearly something that poets choose to do rather than do automatically.  Though it frequently occurs in alliterative-stanzaic poetry, one of the earliest examples, the Auchinleck manuscript’s ‘The Clerk who would see the Virgin’ is not alliterative.  It appears in stanzas from six lines long to eighteen lines long.  It appears in political songs, love lyrics and moral lyrics in MS Harley 2253, and also in shortish narratives.

One type of iteration joins a sequence of monorhymed lines to a final couplet (see examples here and item X here).  Another type joins a group of longer lines to a group of shorter lines often called a ‘wheel’. This iteration tells us that a Middle English stanza could have subdivisions, like the octave and sestet of a sonnet.  Modern critics call these the frons (‘forehead’ or ‘front’) and cauda (‘tail’), or frons and sirma (‘train’, i.e. what trails behind a garment).  These terms are drawn from Dante’s discussion of lyric forms in De Vulgari Eloquentia. In between these two sections is the diesis (the name Dante gives to the point in a lyric where the melody changes), like the volta of a sonnet.  But unlike in the sonnet , where we feel the volta ought to be a break in both meaning and form, some Middle English poets (curiously very like some of the earliest Italian sonneteers of the Sicilian School) felt it was more important to draw a stanza together than to split it up.

Another way to link a section of longer lines with a shorter wheel was a ‘bob’ (a single short line which rhymes with one of the lines of the wheel): Sir Gawain and the Green Knight is famous for its bobs and wheels.  Ad Putter points out that the bob takes over from iteration and renders it unnecessary – the bob ties the two parts of the stanza together as a kind of free-floating linking phrase.

Another innovation which helps kill off iteration (I think) is the stanza form used by the Awntyrs of Arthur poet.  The Awntyrs A stanza rhymes ababababcdddc, with iteration at 8/9.  The first nine lines are rhyming alliterative long lines.  The Awntyrs A poet makes each ninth line the same metre as the first eight, thus linking both by metre (lines 8 and 9 share the same form) and by iteration.  Later poets imitating the Awntyrs A stanza in texts like Gologras and Gawain chose to link by metre (a longer ninth line) and not iteration, and so iteration fell out of fashion.  As Ruth Kennedy and Susanna Fein have shown, however, iteration remains a possibility in hymns praising saints and in a psalm paraphrase.