Some medieval English playwrights use different types of stanza for different types of characters.  In the fifteenth-century morality play Mankind, the personification Mercy begins the play speaking in stanzas which are often called octaves, rhyming ababbcbc (also sometimes called eight-line ballade stanzas, or Monk’s Tale stanzas following their use by Chaucer).  This stanza form is often used for moral or educational writing in later Middle English poetry.  This is a good fit for Mercy’s character, as he begins the play in priestly guise, reminding the audience to persevere in good works and to avoid sin.

What I’d not noticed before is that Mercy’s opening speech also has rhyme-linking from one stanza to another.  The c-rhyme of one stanza becomes the ­a-rhyme of the next stanza.  This stanza-linking rhyme is used to signal formality and poetic control, for example in the prologue of Knyghthode and Bataile.  This use of stanza-linking facilitates the memorable moment where the chief vice Mischief appropriates both Mercy’s rhyme sound and his reference to the saved corn and the burned chaff: 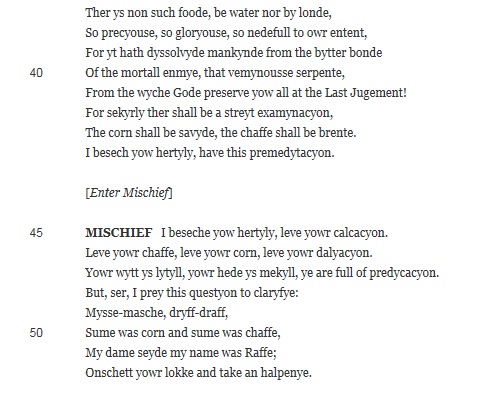 If you’re thinking stanzaically (as I obsessively am), you also see an appropriation of this stanza linking.  Mischief seizes Mercy’s c-rhyme and uses it to begin a tail-rhyme stanza which rhymes aaabcccb.  As we shift suddenly from virtue to vice, the stanzas shift from one type of eight-line stanza to another.  One is virtuous octaves, the other is scurrilous tail-rhyme.  This is somewhat peculiar, as Rhiannon Purdie has shown the “lyrical, pious and didactic associations of the tail-rhyme stanza” in her recent study.  But in Middle English morality plays it seems to be associated with the vice characters and with the imminent fall into sin of the central protagonist(s).

Mercy doesn’t always talk in octaves: he also converses with the title character Mankind in abab quatrains.  Quatrains appear to be the stanzaic middle ground, which allow the divine personification to communicate with an everyman figure.  But just as Mankind’s behaviour and language change when he comes into contact with the vices, so too his stanza form changes: 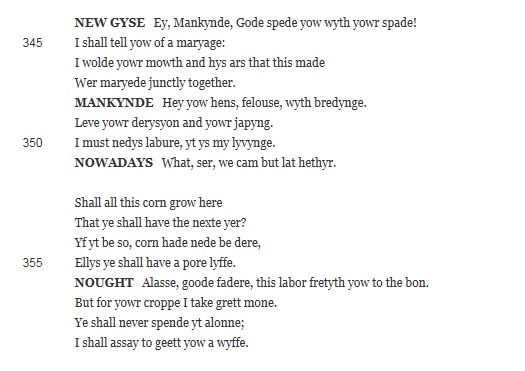 Here Mankind is drawn into a tail-rhyme pattern even as he is still defending himself against the obscenity of the vices.  Cleverly, the verse-form shifts ahead of his fall.  The audience have confirmed, stanzaically, what they already know to be coming: Mankind’s fall into vice.

Similar effects are found in other plays.  In the morality play Wisdom, the characters of Wisdom and Anima begin by speaking in octaves, and the protagonist faculties Mind, Will and Understanding join them in this stanza pattern.  When Lucifer appears, he, in contrast, speaks in tail-rhyme stanzas aaabaaab.  As in Mankind, Mind and Understanding switch to tail-rhyme spontaneously at line 381, even though nothing has happened beyond Lucifer disguising himself as a gallant. The switch in form signals the imminent fall into sin.  For the duration of their sinful behaviour, they talk in tail-rhyme, returning to octaves once Wisdom returns (in both senses) at the end of the play.  Stanza-forms are here working allegorically, signalling both form and meaning.

3 thoughts on “Good and Bad Stanzas”