Middle English poetry relies on repetition to create its rhythms and artfulness.  Metre and rhyme-schemes are in themselves patterns of repetition, patterns of alternate stress and  of repeated rhyme-sounds.   Repetitions can be consciously planned by poets, built into their poetry even as they juggle the demands of meaning, metre and rhyme.  Or they can be found in poems by readers who can find meaning and coherence in something a poet has not consciously planned.  As well as the repetition of words and phrases, grammatical structures can be repeated (i.e. the same syntactical pattern repeated with different words in each instance).

END_OF_DOCUMENT_TOKEN_TO_BE_REPLACED 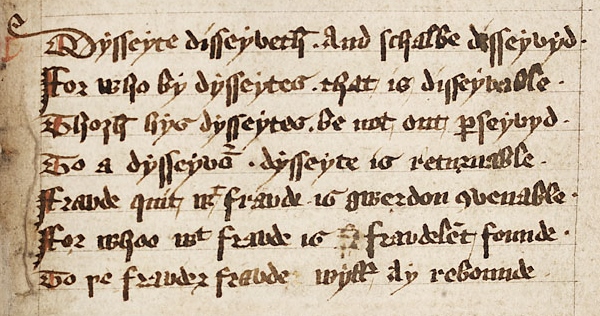 END_OF_DOCUMENT_TOKEN_TO_BE_REPLACED

Last week’s poem was able to mean two opposite things by encoding two different readings within one stanza.  This week’s choice (scroll down for text and translation) has the trick of meaning the same thing in two different ways.  At a quick glance, it looks just like any number of fifteenth-century love poems, full of praise of a lover’s lady’s virtues and beauties.  But each of the lines of the ballade proper (as opposed to the envoy) are constructed so that you can read them from left to right as usual, but also from right to left.  Cleverly the rhyme also works in reverse, with rhyme words at the beginning and end of lines.  Pick a line and try it first forwards and then backwards.

END_OF_DOCUMENT_TOKEN_TO_BE_REPLACED

Here’s another love poem, this time a short lover’s lament (DIMEV 3269) from London, British Library MS Harley 913.  Scroll down for a text and translation.  MS Harley 913 is a trilingual mid-fourteenth-century anthology of poetry and prose, copied by a Franciscan friar living in Waterford in the south of Ireland.  The poem narrates how love has brought the speaker into sinful thought, then to the absence of reason and reflection (which nonetheless proves futile as a means of escaping love), then into grief and anxiety, and then to despair.  It ends with his resolution to continue even without hope of his lady’s favour until death and the grave.

END_OF_DOCUMENT_TOKEN_TO_BE_REPLACED

After the sounds of old age come the sounds and signs of death.  These derive from medical lists of symptoms given in Hippocrates and Galen (see Rosemary Woolf, The English Religious Lyric in the Middle Ages (1968), pp. 79–82).  Some medieval poets, whether for mnemonic, rhetorical or other purposes, transformed them into verse.  In the early fourteenth-century Fascisculus Morum (a handbook for preachers written by a Franciscan friar), three Latin couplets listing the signs of death attributed (apocryphally) to St Jerome are cited, as well as a Middle English poem beginning ‘When the hede quakyth / And the lyppis blakyth’ which gives eight different signs of death before a brief conclusion.  Other versions, medical and moral, are recorded by R H Robbins, ‘Signs of Death in Middle English’, Mediaeval Studies, 32 (1970), 282–98.